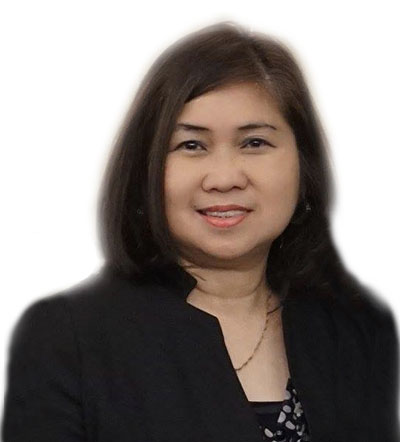 Genoveva (Van) Berin Torres is currently the Regional Pastor for the East USA Region in JIL Americas.
Ptr. Van is married to Bro. Randy Torres, and they have four grown children and four grandchildren. Prior to serving full time in the JIL ministry, Ptr. Van worked for 21 years at the World Bank Group as Senior Program Assistant in the Education Unit. She was a BS HRA graduate from the University of the Philippines.

Brief Background:
1993-1995 (JIL Manila)
Sis. Van started in JIL ministry in 1993 through the Young Professional Adults Club (YPAC) in JIL Manila, where she was involved in intercessory prayer and church planting. She also served as a cell group worker in District 5 in Paco, Manila and later as a bible teacher in TUP, Manila after graduating from the Bible Teachers’ Training Course in December 1994.

1997-2009: Served in various capacities in JIL Virginia (which became JIL Arlington) – worship leader, treasurer, administration, education, and as a cell group leader and was part of the church management team. Also served as Education Head and JIL 12 Coordinator of JIL Church Arlington, Virginia before being assigned to Rockville MD as an Outreach/Church Coordinator.